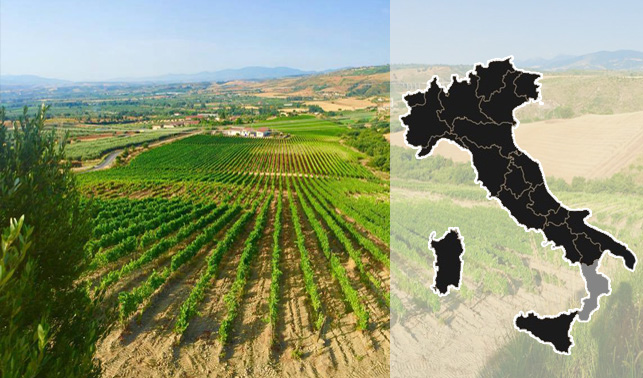 The company is located in Castrovillari (CS) in Calabria, Southern Italy. Starting from the very first plants in 2006, today it owns 20 hectares of vineyards and 5 hectares of olive groves. The winery has been operating since 2013, when the first 14,000 bottles of Magliocco (red wine) were produced, without any external intervention, to ensure maximum recognition of the territory and its vines (terroir). Our first autochthonous white wine, the Greco Bianco, was born in 2014. In the 2016 harvest, we vinified our first rosé wine from Aglianico grapes.
Today the winery is driven with passion and enthusiasm by the young winemaker Valerio Cipolla. . 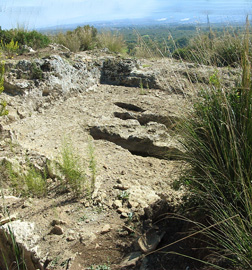 History of the district

The Celimarro district is named after the Greek name KUR-MARIOS, ‘’Lord Mario’’, probably the name of an ancient land owner who lived while Greek was still in use – there is proof of its use in Castrovillari the 13th century. The district is known for its archaeological evidence, from fossil remains dating back to prehistoric times, to the traces of the Roman consular road Popilia-Annia begun in 162 BC, to the remains of the Roman villa of Camerelle, not to mention the rare construction of Familongo, located close by and dated to the III century AD. Familongo is still intact, from the foundations to the vault, and the burial ground of possible Lombard origins. Last but not least are the rural buildings, dating back to the eighteenth century, such as the Gallo farm, today named Bonifati, and three farms that can be traced back to the Varcasia family and its several branches. 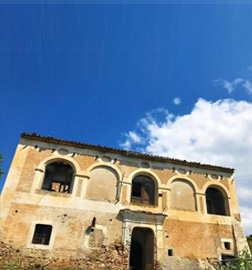 History of the rural complex

The rural complex of the Varcasias is considered the most beautiful and fitting examples of eighteenth-century masseria, among those located in Castrovillari. The patronal house, not quite large, comes from an almost-squared building built in the second half of the eighteenth century, perhaps on older ruins, partly visible in the large vaulted barn. Years later, a partially closed loggia was added to the façade through large arches. The interior is filled with paintings, most of them religious, hanging from the walls of the great hall to the other rooms and corridors: the ever present Madonna del Castello, patroness of Castrovillari, and an episode of the life of St. Francis of Assisi, a saint to whom the painter, the Adv. Antonio Varcasia, was particularly attached. For this reason, after his death, he left part of his estate to the Franciscans. Other interesting elements are the landscape covered in vegetation, and the several portraits of family members. In addition to these paintings, flowers surround greetings and words dedicated to the numerous guests who filled the villa. The whole decorative apparatus was realized by Mr. Varcasia during the 1920-30s. On the right side is a small chapel dedicated to St. Nicholas, founded by Don Lonardo Adreassi in 1769, as stated by the tombstone situated on the door , which also states the chapel did not allow confuggio, the asylum offered by churches to fugitives from justice. The roof is a bell gable, once decorated with bells. The interior is decorated with floral motifs added in the 1920s by Varcasia, whose painting of St. Nicholas of Myra was stolen from the altar. On the other side of the manor is a settler’s house which, before World War II, hosted an elementary school for the children of workers of the large estates in Piana di Camerata (today Cammarata). The coat of arms of the Savoia royal family stands as proof of it. Further behind were large brick vault stables for sheep, interesting building for its morphology, and for the written proof of much older construction works, maybe even Roman or early medieval. The structure, however, shows similarities to the rare mithraeum of the nearby Familongo, perhaps from the III century AD. All around are various smaller buildings, put to different uses related to farming. A large fountain and an oval brick tub can also be found, probably related to a Roman era nymphaeum (F. Cantarelli 1978). All this information goes to show how unique of an example the manor is in regards to ancient rural architecture. 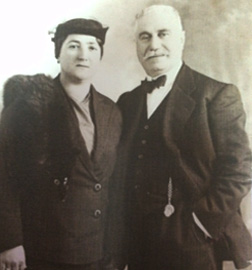 The Varcasia family originates far back in time, where traces of it can be found with an archaic version of their name. In fact, the oldest evidence dates back to 1334, when a Guglielmo Barcasedi is listed among the priests of Santa Maria del Castello. In 1428 was another priest named Francesco Barcasedi, and so again in 1445 with Antonio Barcasedi. In 1750 a Nicola Barcasia is found, so that is when the surname started evolving until it reached its current form in the early 1800s, during the lifespan of Pietro Varcasia, famous for his favors to the French crown that occupied the Kingdom of Naples(1806 -1815). Other note-worthy members of the Varcasia family were Michele Clergy of the SS. Trinità (1840), lawyer Achille (1880), Vecovile Lieutenant (1870) Nicola, Pietro (1900) and finally Antonio, lawyer and last owner of the historic farm. Of wealthy family, the "Lord of Celimarro" (as they called him) was born on 22 April 1876 from Varcasia Domenico and Stigliani Rosina. He got his Law eagree at the University of Naples on July 20, 1899. He married Emilia Antonietta Giangreco on April 30, 1930 (the event is remembered at the entrance of the Masseria with the phrase "Antonio and Emilia 1930"). An only child, he gave up law to manage the family property. During the farm’s golden age, the buildings around the complex were home to several settlers who worked the land and cared for livestock. A whimsical and extravagant personality, although religious and devoted, he embellished both the Palazzo Varcasia (located in Castrovillari in Corso Garibaldi) and the Masseria di Celimarro with numerous paintings and allegories. Its passion for painting came from his father Domenico. Religious until the end of his days, he died in 1947 right in his Masseria which, as stated in his testament, he left to the Church with the whole land. 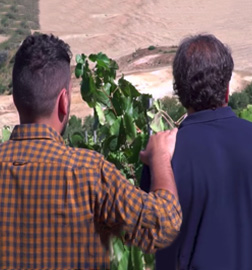 After the passing of Adv. Antonio Varcasia, the land and the farm were long abandoned. In 2006, driven by passion and courage, the Cipolla family acquired the estate and started restoring the company's productivity, starting from the land. The initial effort was towards the autochthonous varieties in the old vines (such as the Lacrima di Castrovillari, at risk of extinction), by re-grafting them on the wild rooted cuttings, thus planting the new vineyards. Today, the company is led by the young winemaker Valerio Cipolla, and counts on 20 hectares of vineyards, cultivated organically on 5 hectares of centuries-old olive groves. 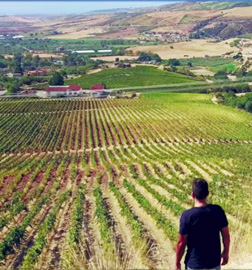 From a young age, I’d follow my grandfather Francesco in his small cellar, and every time I was fascinated by the world of wine-making. I started my studies in enology at the Catholic University of the Sacred Heart in Piacenza, and then I graduated in viticulture and enology at the University of Basilicata (Potenza). I like to call myself a simple winemaker. Today, at the age of 30, I take care of every aspect of the winery starting from the grapes in the vineyards, where I am flanked by my brother Stefano, up to the bottle, the marketing of the product and the final sale in the HO.RE.CA channels. and G.D.O. 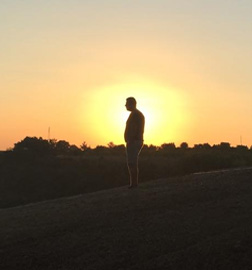 I am responsible for the agronomic management of the family business, I follow every aspect related to production, from the vineyard to the grape. Excellent work in the vineyard translates to excellent wine in the cellar. 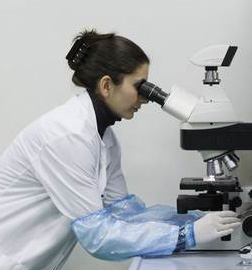 I graduated in Biological Sciences at the University of Calabria. Within the company, I deal with every aspect related to the research and development of new products. 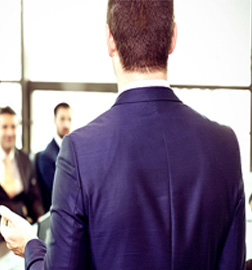 Responsible for the sale of wines in the HO.RE.CA. Send email to tenuta@celimarro.it.

Located in a natural valley called "Conca del Re", at about 360 meters above sea level, Castrovillari is surrounded by the highest peaks of the Pollino Massif, and is the largest center of the Pollino National Park. The name "Castrovillari" probably derives from the late medieval Latin castrum villarum (literally "fortress of the villas"). The town was founded by the Aragonese, to whom we owe the splendid Aragonese Castle. There are the monumental church of San Giuliano, the Protoconvento Francescano and, on a hill, the famous Madonna del Castello. Also worth visiting are the historic centers of Morano and Altomonte, among the most beautiful villages in Italy. Not far away are the remains of the ancient Sybaris. The entire territory of the upper Ionian Cosenza is undoubtedly one of the most beautiful places in southern Italy.

Signature wine with a strong and clean flavor, which refers to sensations of freshness and fruity flavors with hints of minerals and undergrowth. With an intense and bright red color, it loves to accompany roasts, sturdy dishes and aged cheeses.

Greco Bianco is born with a fruity and intense fragrance. The first grapes were vinified in the 2014 harvest. It is a very particular wine with a bright amber color that has a good balance between acidity and freshness.

A timeless rosé wine, produced from Aglianico grapes. With a pure and fruity fragrance. Fresh and balanced, for refined palates. Ideal for aperitifs and for summer consumption, for dishes based on fish, white meats and medium-aged cheeses.

A native wine with golden reflections. Its taste and its scent recall sweet thoughts, it goes well with aperitifs, delicate appetizers and fish dishes.

We are members of consortium
Terre di Cosenza D.O.P.

for the protection, enhancement and promotion of local wines 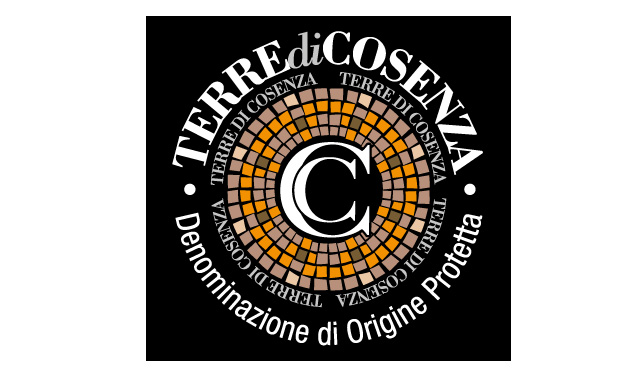 Since 2015 we are part of the consortium for the protection of the D.O.P. Terre di Cosenza. The designation D.O.P., or the Protected Designation of Origin, is a trademark of legal protection that is attributed to foods that possess particular characteristics given by the territory in which they are produced. In order for a product to obtain this mark, the manufacturer must adhere to strict rules, which are laid down in the production specification. Our wines boast the Terre di Cosenza brand D.O.P.

We are Cia members 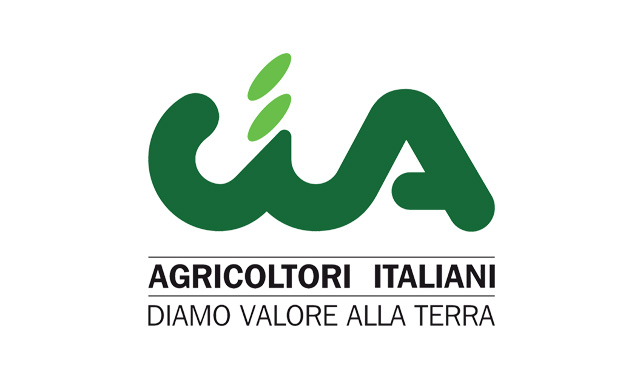 We are part of the Italian Confederation of Farmers, one of the largest organizations in Europe that works to improve and enhance the primary sector and to protect the conditions of its employees, counting on around 900,000 members in Italy.

We are present on these wines guides 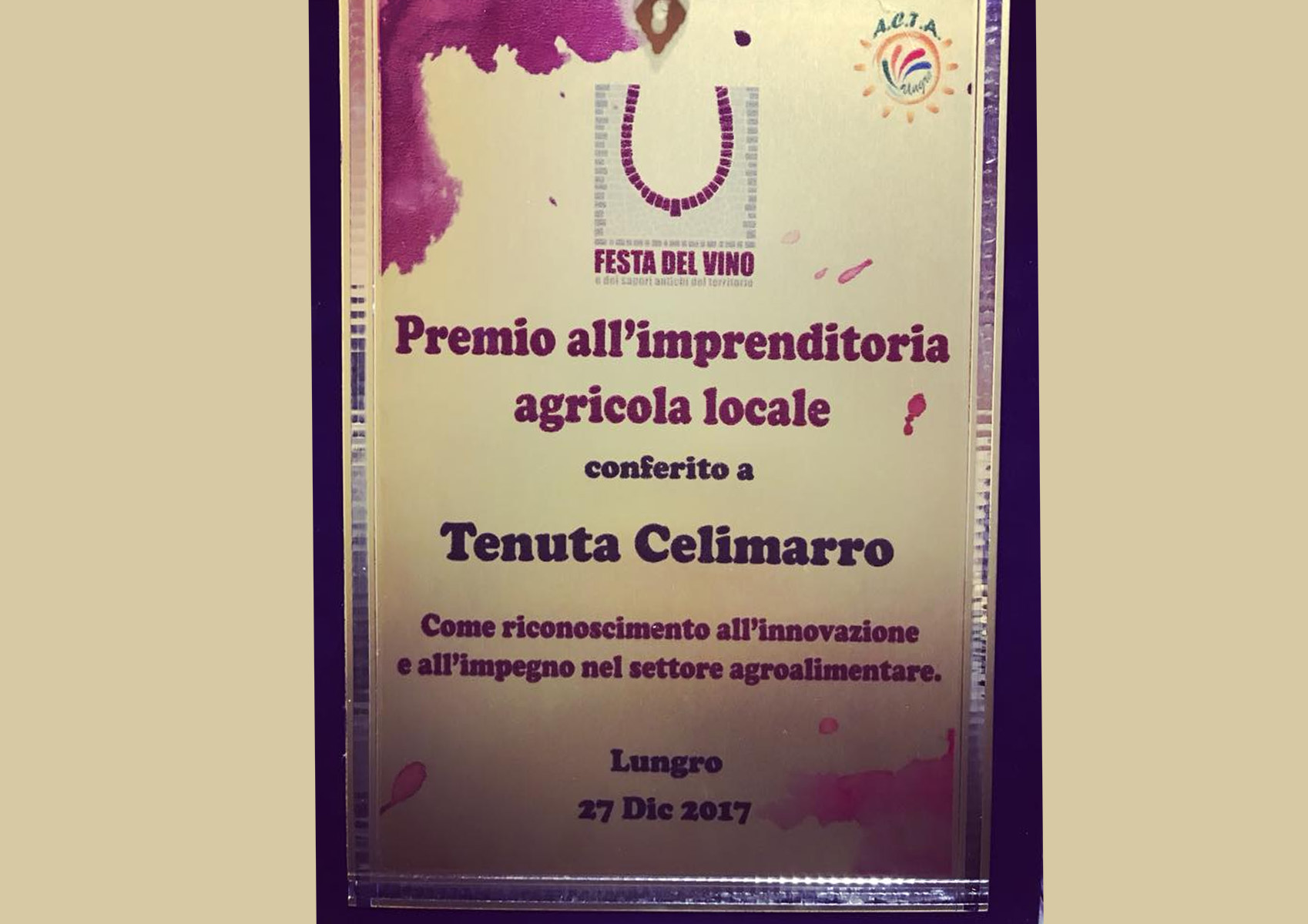 Received from ACTA UNGRA in recognition of innovation and commitment in the agri-food sector. 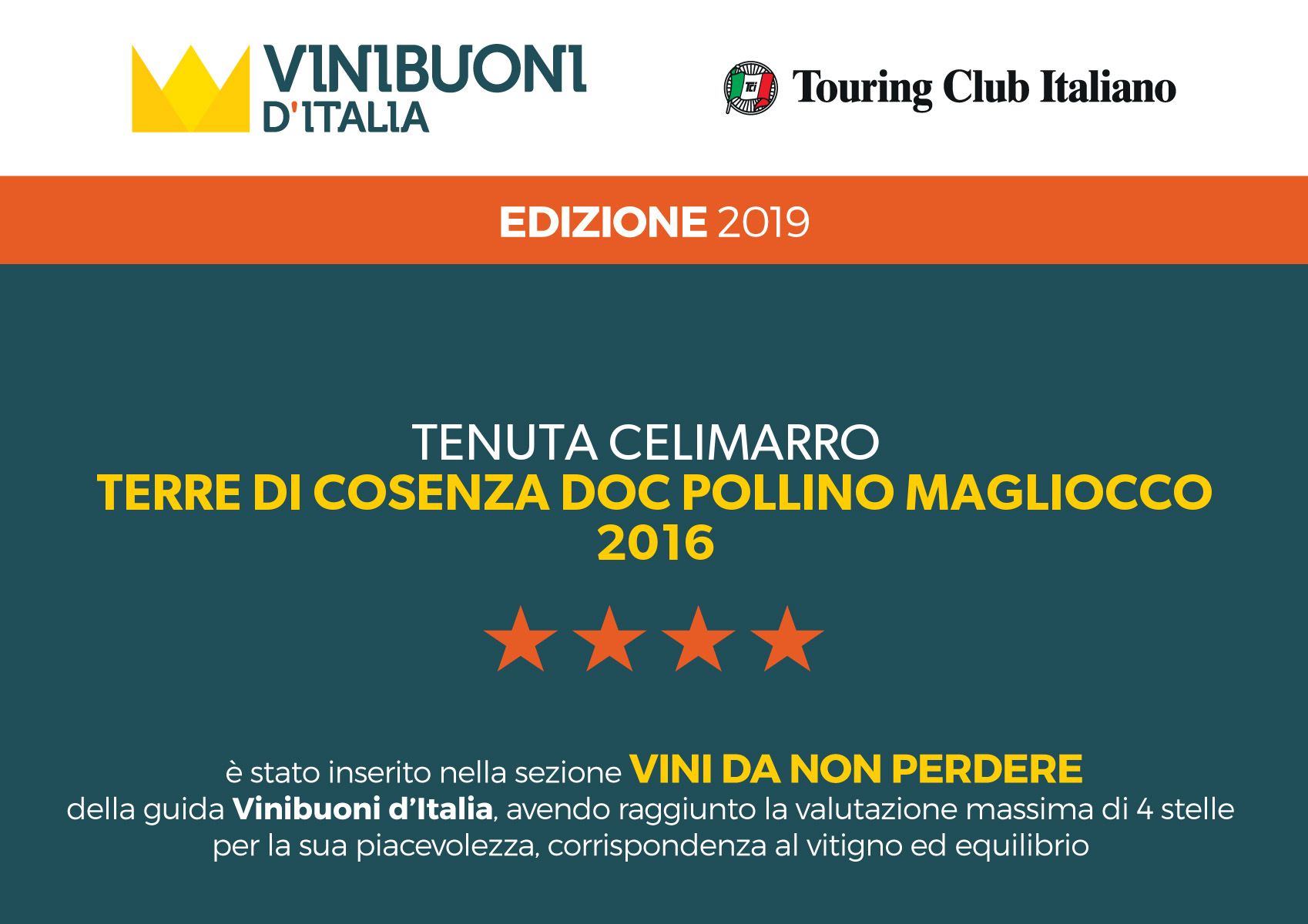 The follow-up of the tastings by the regional authorities of the Vinibuoni d'Italia guide was included for the 2019 edition in the "WINES NOT TO BE MISSED" section with Magliocco 2016 Dop Terre of Cosenza Pollino, which for its pleasantness, correspondence to the vine and balance has reached the maximum rating of 4 stars.

Vinibuoni d'Italia and Enosocial, partner of the guide, on the occasion of the official presentation of the 2019 edition in Merano, have rewarded our company for having been able to embrace the new challenges of communication, with original choices and attentive to novelties.

book your visit to the company and taste our wines.

For more information write, we will reply you in the shortest time possible.